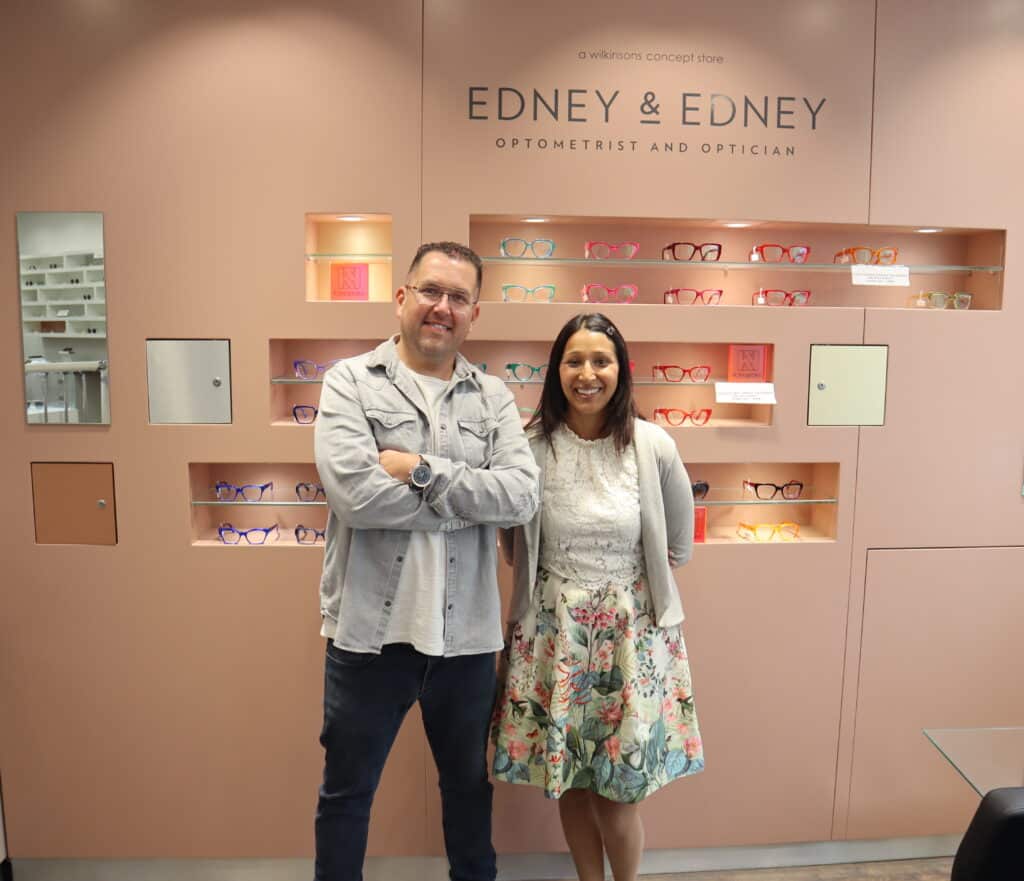 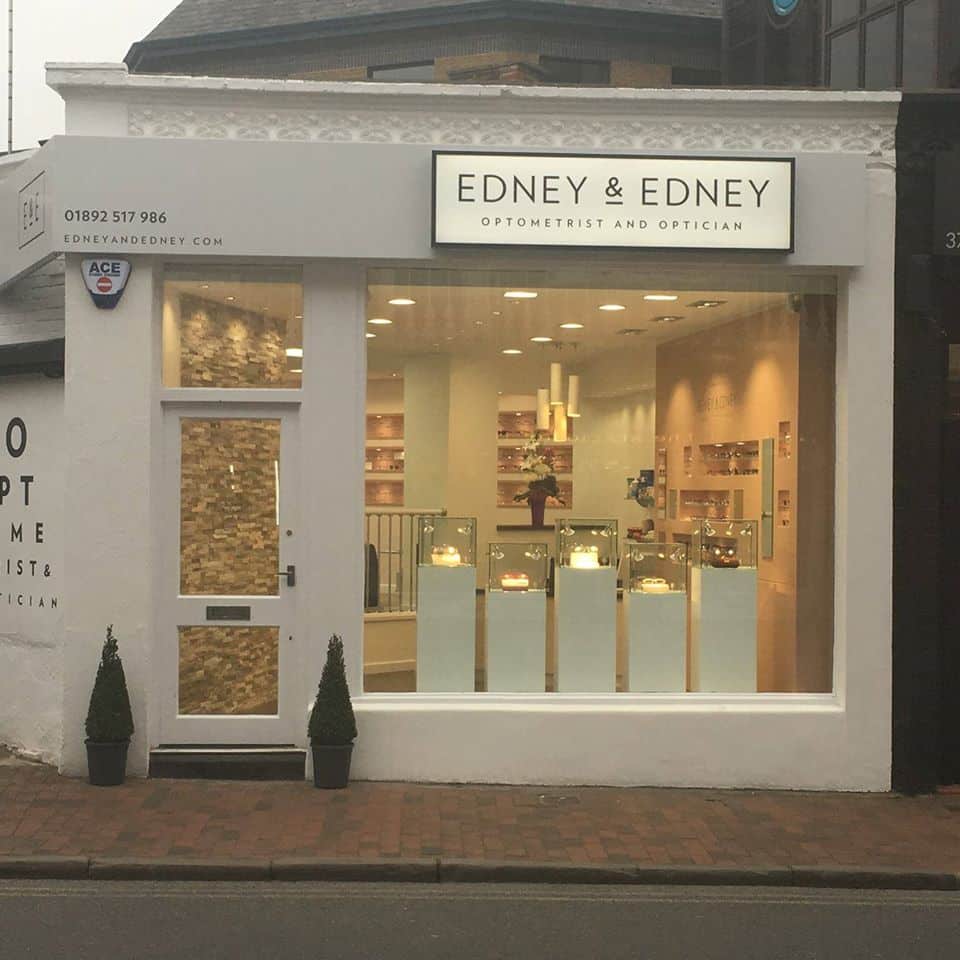 “We both worked for a good quality independent optician, Ayshah has been qualified for twenty years now, but what we found was a large part of people attending didn’t actually want to be there, they didn’t really want new glasses, they had possibly been sent a letter saying they were due a renewal so thought they should. When you sat them down and said they needed a new pair of glasses, you could see their shoulders drop! They think of the expense – having to choose something they are un-sure about and are usually not really into glasses.

This trend tends to be similar all over the UK and part of the reason why the chains who are at the lower end of the market are so busy, because if it’s something the people don’t really want, they don’t want to spend much money. Whereas across Europe, glasses are seen as something different, you might have six different pairs of really nice glasses for different activities and different looks.

I’m very much into my frames and Ayshah is very much into eye care and we have often thought that it would be great to open a European style store in the UK and the one place we kept thinking of where it would work was Tunbridge Wells, but we had some doubt in our mind as if it’s that obvious, why hasn’t someone else done it. So, we kind of toyed around with the idea for a while, I had just had my 40th birthday, Ayshah was pregnant with our second child and It was that situation, realising we could be working another 20 to 25 years, maybe even more! So, we thought, let’s go for it!

We came and looked at premises and this place had been free for a year and whilst my heart was telling me we should be down in the Chapel Place area, the rents were so much more down there, and we were starting at zero. We thought this is a great road to be on (Monson Road) and a really good location, so I waved the lease under Ayshahs nose when she was feeling rough in her pregnancy. You could say I got her to commit at her weakest point, but it worked!

We knew if we did it the right way, we will attract people from not just Tunbridge Wells but the outside villages and the gated communities, but also from afar. People who are into their eyewear are into it, it’s just not that high a percentage. But, we knew if we get it right, we’ll get people coming back who previously had one pair in the last two years or four years and even come back in a period of two years and buy three or four times because now they’ve opened up their eyes to what is available, it’s not just a pair of glasses. It’s not just brown or black, it’s not just ray-ban, there’s a whole plethora of amazing creative designers, producing the most amazing frames. A common phrase we hear is ‘this is like a sweet shop for glasses’

We quite often get somebody come in and say, I’ve looked in four or five opticians so far and I can’t find anything. So, if we do it right, when they come here, they will find four or five pairs they like and then their decision is which one do they go for. A lady came in this morning saying she struggled to find glasses and that she didn’t particularly like wearing glasses, we sat down and looked at six carefully chosen pairs, she bought four of them – she was actually un-sure which of the four she should go for because she loved them all.

When we signed the lease, I was celebrating with some buddies up in London and took a step off a curb and broke my ankle! so the whole refit, which was done by professional shop fitters but designed completely by us, was done with a cast on my ankle, but we got it done in time, at one point I said to Ayshah I wasn’t sure if I could get to work – she made sure I did!

That was in August 2016 and we opened on 15th October 2016. When we opened, we put together an eyewear collection which had a lot of what we wanted, but because we were opening from zero, we didn’t want people to come in and see frames that they had never heard of or seen before and be frightened off, and not shop with us. So, we introduced some mass produced brands – ranges that people would be aware of, that’s not what we wanted – but we thought we’d best play it safe, so that people would recognise something, we might then be able to show them something a little bit different and they can move with us. It became apparent within six months that nobody wanted that at all, people were coming in and were wowed by all the other really creative unique pieces we have.

We spent that first 12 months expanding on the eyewear that we source from all around the world, from all different suppliers – who only make frames! All of those frames with the fashion label on the side aren’t actually made by the fashion house. They just sell the licence, then a big frame producer produces them, stamps them, and then they are sold.

We make sure that every company we work with has a story to back it up, everything’s handmade, they innovate and then the rest of the industry follows, but like a lot of innovators, not many people see what they’re doing before a big company copies it, put their own stamp on it and then puts it on the back of Vogue, that’s very much how it works. So, we’re supporting the small guys and those small guys really support us. We want to enjoy working, the clients we attract are amazing, real characters, everyone comes in with a smile on their face, they kind of know what they’re walking into and because of that they want to be here. Customers see our passion and they like the husband and wife team, our names on the door so we’re going to look after people. The best thing is working with people that actually want to be here.”

Edney & Edney is a boutique opticians in the heart of Tunbridge Wells. We combine artisan and luxury eyewear with ultra modern eyecare.