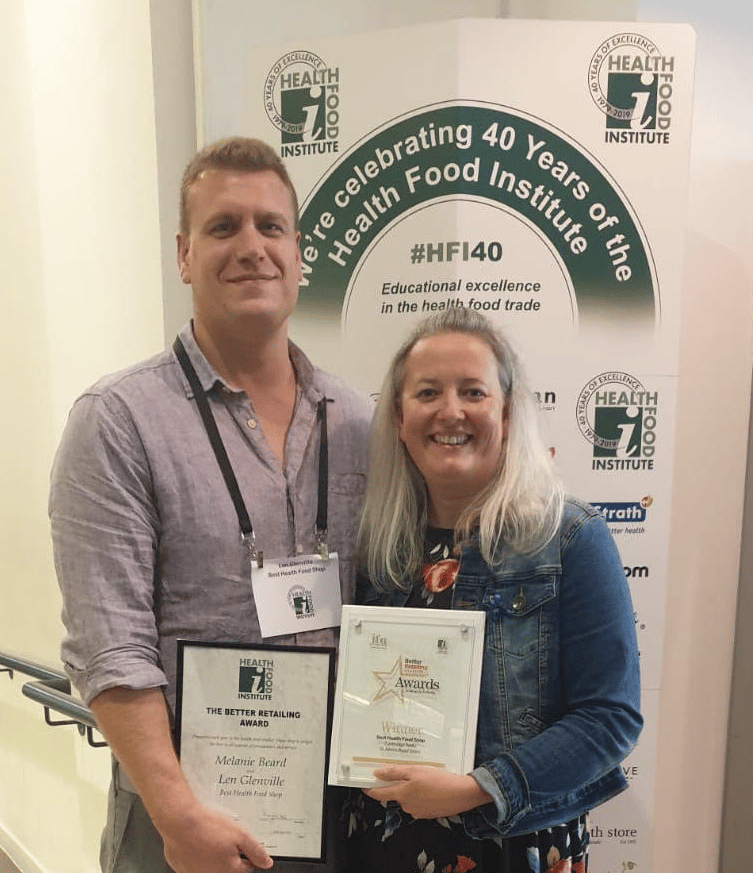 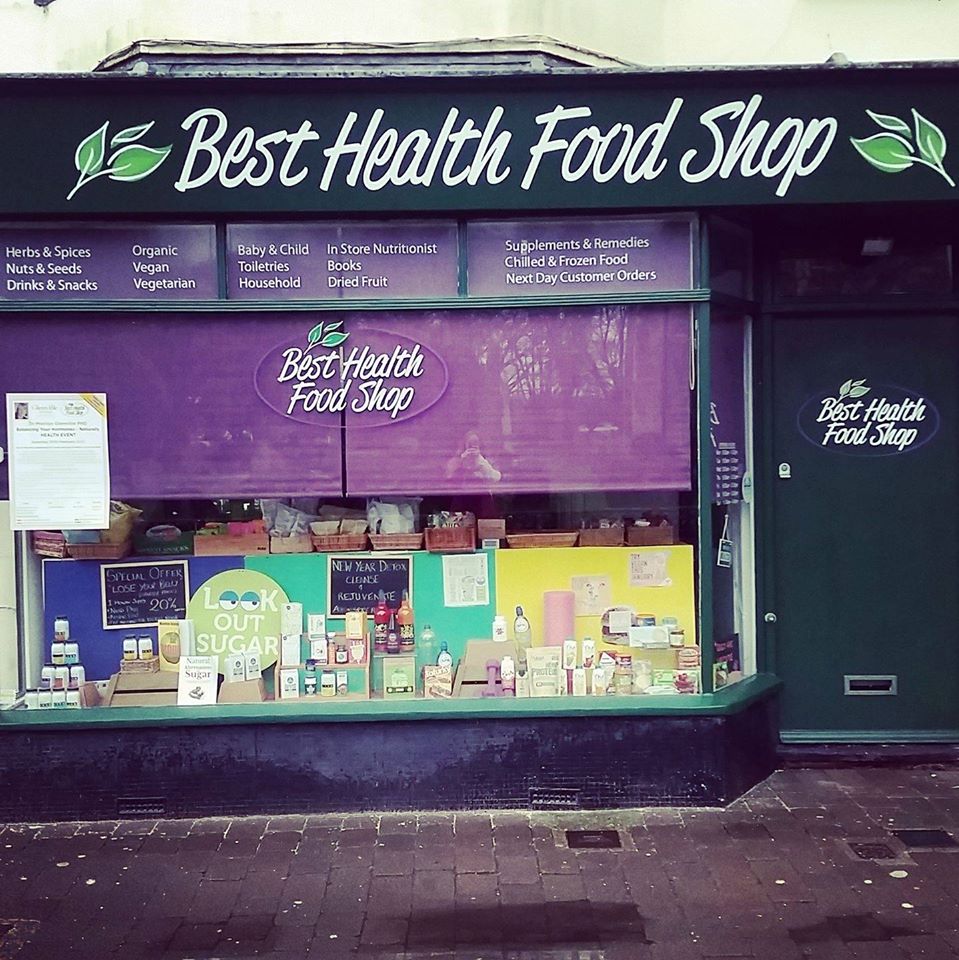 “My partner, Len and I started our 1st Best Health Food Shop in 2016. We already had our own businesses; Len has a website marketing company which he founded in Jan 2008 which he still runs and I founded a business consultancy company in 2014. We decided wanted to go into business together and wanted to do something that we were both passionate about and going into the health industry just seemed to click and make perfect sense for us because of our backgrounds.

Len’s mum is the well-known nutritionist – Dr Marilyn Glenville who has written many books appears on TV & radio and has a successful clinic in Tunbridge Wells (just along St Johns Road not far from the shop) and also in Harley Street. Len was brought up on healthy food and has that side of the health industry and knowledge in his blood. Marilyn’s husband’s company is The Natural Health Practice which supplies and manufactures supplements. I was director of this company for 10 years and also managed Marilyn’s clinic as well. Which is how Len and I met.

I’ve lived in Tunbridge Wells my whole life and went to school here (TWGGS – just round the corner from the shop) and Lens family are from Crowborough so we’re all very local. Initially we thought we’d like to buy an existing business rather than setting one up from scratch, so we were looking at things like gyms and anything that was health related. We looked at a few and kept thinking, wouldn’t it be good if you could put a shop at the front with all the healthy food and it’s then that we realised we should be looking at doing a health food shop instead.

After a long time of searching and visiting many health food shops, we finally found the perfect one and bought our first shop in Shoreham-by-Sea in 2016. The previous owner had been there about 8 years and had done an amazing job growing the business and being well known with the local customers.

When we took over the store the first thing we did was to extend the opening hours so we were open 7 days a week and we worked in the shop every day for 9 months to learn the ropes and to understand the processes needed to run the business. We knew a lot about the food and the supplements, but we had never actually worked in retail before. Once we had got the hang of it and introduced new till systems, etc we then spend a long time recruiting staff that would carry the same ethos and customer service we had been building.

We trained them up so that they could carry on with the day to day running of the store whilst we focused our time on bring other things into the business (like doing local events that Marilyn would give; a health talk for half a day to local residents. Our first talk reached maximum venue capacity with over 150 people attending, which was amazing! So we decided we would be doing more of these events going forwards – as education is also hugely important to us). As we were confident with our team we decided to open a Best Health Food Shop in Tunbridge Wells on St Johns road (in the middle of the little row of shops along that road). As it was my hometown and somewhere I really wanted to have another shop. We specifically wanted to be on St Johns road too as I also used to work at the Atman clinic (a complementary health clinic) and also because I went to school near there. We’ve never wanted our shops to be in shopping malls as we’ve always wanted them to be amongst a community and to grow them to be part of those communities supporting local residents and other local businesses too.

At the time, in 2017, there weren’t any units to rent on St Johns road so we put a letter through everyone’s door, saying that if they were thinking of leaving we would like to take on their lease etc and we were contacted by someone who was looking to do just that! We are really pleased with where we are, right next to the traffic lighted pedestrian crossing near the antique shop and opposite Basil, with a nice community feel about it. We opened the St Johns shop completely from scratch and got it up and running in about 6 weeks.

In February last year, we had a phone call from the gentleman who owned the health food shop down near the train station on the high street in Tunbridge Wells, and he said he would like to retire and asked if we wanted his shop! We hadn’t even planned for this and his lease was running out in April, so we only had less than two months to make a quick decision! Previously when we took on the Shoreham-by-Sea shop it took us a year to finalise everything, so we had no idea how we would turn this all around in six weeks! But we knew we wanted to do it so found a way and we took it over from him on 29th April 2019.

At the same time, we had been chatting to a lady who owned a health food shop in Uckfield, we’d been talking to her for about two years as she had been looking to retire as well. Then, in June she rang us, telling us that she was ready to retire and that we could have the shop if we wanted it! So, we had to put our thinking caps on again and work out how to make this happen whilst we had only just taken over the High Street store. We worked it all out and renovated the whole of the Uckfield store to make it more modern and in keeping with the rest of our stores and we opened the doors on the 12th October. At the same time that this was going on we had a call from an agent that we had approached a few years back about a particular street in Worthing, where we wanted to open a Best Health Food Shop – he called us out of the blue to say a retail unit had come up and he would give us first refusal on it but the landlord wants us to complete on the 1st October! So 2 weeks after we’d have opened the doors to the Uckfield store! We couldn’t quite get the timing to work for us to open on the 1st of Oct but we did open on the 15th of Nov instead.

We could then now focus our attention back on the High Street shop as we had wanted to refurbish it and add in our zero waste refill stations, etc. The refurbishment of the shop on the high street in Tunbridge Wells was completed in January this year, 2020 and we re-launched as Best Health Food Shop, with brand new flooring, dispensers, shelving and the zero waste sections. We also put new signage up and had a launch party that the Mayor came to on the 1st of February this year.

Something we were hugely proud of was wining the best Retailer of the Year award (Better Retailing Magazine) for our St Johns store, for exceptional customer service and best shopping experience in a Health Food shop, across the whole of the UK just eighteen months after we had opened! We were over the moon with that as is exactly what we had set out to achieve from the beginning and to be recognised for it was just amazing.

It was always a bit of a gamble to have two shops in Tunbridge Wells but, they are very different and have a different demographic between them and they also work well from a staff and a stock perspective because we can share across the two and work together as team which in turn benefits our lovely and loyal customers as well.

I love Tunbridge Wells and am very grateful for all the support and positivity that the lovely people in the community of Tunbridge Wells have offered. We could not have done it without them and all our lovely and supportive staff. So thank you to everyone and make sure you pop in to one of our stores if you haven’t already as we’ve got lots of goodies and will hunt down pretty much anything might be after as well!

We absolutely love what we do and our passion for health, food and the environment is what motivates us to keep busy and keep the shops innovative and always offering new things. We also enjoy sharing our knowledge and getting involved with the local community with things like events, in store demonstrations and qualified nutritionists in the shops to offer advice and help to customers. We strive to give every customer exceptional service and hope that they all have a positive experience in the shops and that we can help them with anything they need.”

We are continuously striving to bring you a wide selection of products as well as introducing new ones as they come to market. You will find a range of organic, vegetarian, gluten free and vegan foods in our Tunbridge Wells health food shops.
We also have a range of high quality supplements and toiletries – we want to offer you products that are the highest quality and have the greatest benefits to you. Our in store qualified Nutritionists are also available to help you with advice on food and your health.