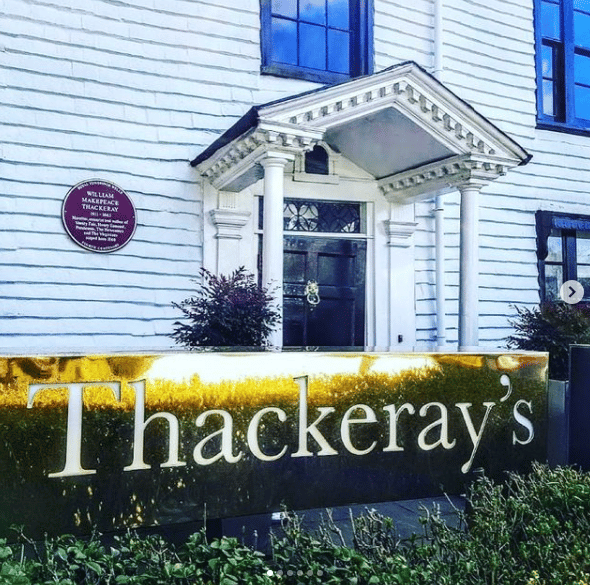 We are very proud to be recognised for the 6th consecutive year in the AA notable wine list award.

At Thackeray’s we have always strived to provide our guests with a unique experience and the wine list is no exception! Too often restaurant lists can be a totally self indulgent labour of love, representing one individuals taste but often at the expense of the diner’s pleasure (and pocket!). I know… I have done it myself!

For this reason our list is a true collective effort, I encourage all of the staff to be involved in the tasting and selection process, taking on board all feedback. Whether it be one of the Chefs suggestions on food matching or one of my junior waiter’s recollections of a somewhat overzealous night out… wine is for everyone and everyone’s opinion is important. So whether it be an iconic Bordeaux from one of the outstanding vintages, a glass of something familiar or something a little more idiosyncratic, I am confident that myself or one of my team can recommend just the right wine.

“It was never my intention to work in hospitality, my goal was to study art and graphic design, but through my higher education, I inevitably ended up working in bars and pubs and found I had a genuine interest in food and produce. Whilst studying I found myself working in night clubs and then managing night clubs up in Nottingham, where I lived for a few years. I moved down to East Sussex and met up with an old friend who had opened up an Italian restaurant in my local town which I co-managed with him, it was very successful and we were lucky as we opened it just at the end of the nineties when Italian Pizzerias were very popular. So, more by accident than by design, I found I had an aptitude for what I was doing with front of house and realised from a very young age that serving people alcohol made you a lot of friends.

After working with him for a couple of years I found that I gravitated towards the industry as a career, so in order to progress that, I wanted to get out of the local small independent restaurant industry and progress through the hotel industry, beyond casual dining, into formal dining and on to accoladed restaurants. It was at the height of the television chef, restaurant, programmes where I actually had the pleasure of seeing Richard every-time I turned on the TV!

So, I managed a restaurant in a country house hotel for two years, which gave me the experience to approach Richard here, when he was advertising for a Restaurant Manager, it gave me that step up, working with a recognised chef, and I hit it off with Richard very quickly. That was in 2005 – Thackeray’s had been here for four years and already held a Michelin star at that time. It was the path I wanted to take and the place I was heading, so, in August 2006 I started as Restaurant Manager.

The industry was a very different climate and the restaurant was a very different restaurant to what it is now, it was what was demanded back then and what was popular, a very strict working environment that was very regimented. A very formal dining experience, and although I had worked towards that sort of situation, I did feel that the climate was changing, and people were looking for a less formal experience. Richard and I discussed it and we were of the same mind that, though you could deliver something with quality and with expertise, that didn’t necessarily mean you had to be too formal, as long as you observed courtesy, and formalities, you don’t have to be too stuffy. So, we intentionally took the direction of de formalising. Our mantra was to be able to be accessible to people to dine on their the 50th wedding anniversary, or their first date as 16 years olds.

I was so driven and ambitious to make the restaurant successful and to prove that I was worthy of the position and to satisfy the customers. I pushed myself to achieve that and pushed the restaurant, obviously with Richard as well and in 2013 I became a partner, which gave me a further invested interest in the business.

It’s a very difficult situation, trying to satisfy and please an older cliental, not in the terms of age but of their dining experience, but also trying to attract a younger audience, that’s always a challenge. But I think we do it really well, we’re constantly re-inventing very small things, just to try and ensure that we’re not only up to date with current trends, but actually trying to set the trends, we’re not trying to reinvent the wheel, but what we are trying to do is just stay ahead of the curve.

I’ve always likened professional hospitality to working in the forces, my parents are ex-military and my brothers are in the forces too and there’s very few industries where you have that real strong bond with people, everyone works very hard towards the same goal. It’s a band of brothers’ effect, and that is genuinely what I think keeps me and a lot of other people invested in it, because you feel like you have a shared experience with people.

I think people who work in customer facing roles have an inherent insecurity because they need to have gratification. The best feeling is when somebody walks out the door and says thank you or walks in and remembers your name and they want you to serve them, because they have and feel that affinity to you. There’s an underlying need for gratification that we crave, so we want to keep doing it.”

Thackeray’s is a restaurant in Royal Tunbridge Wells, Kent. At Thackeray’s we offer a relaxed form of fine dining free from pretension, applying classic European culinary philosophies to modern dishes. We believe strongly in the importance of provenance, and for that reason use the highest quality local produce wherever possible. We believe in creativity, when applied with consistently high standards and exquisite attention to detail. And finally we endeavour to provide a warm atmosphere with friendly, attentive and knowledgeable service.

Our setting is fairly unique. The building, a former residence of author William Makepeace Thackeray, is more than 300 years old and is a virtual work of art itself. Odd angles, sloped ceilings and off-kilter stairways make it feel almost like something from a fantasy world. It sits just off London Road, among a cluster of traditional-style English villas, and overlooks the open grassy common.

We are not an exclusive restaurant and have no desire to be one. For that reason we offer a wide variety of menus, from our daily set lunch menu, to our indulgent Chef’s tasting menu. Our Head Chef, Patrick Hill uses his immense knowledge, passion and creativity to craft ever-changing, seasonal menus to inspire and delight all tastes.