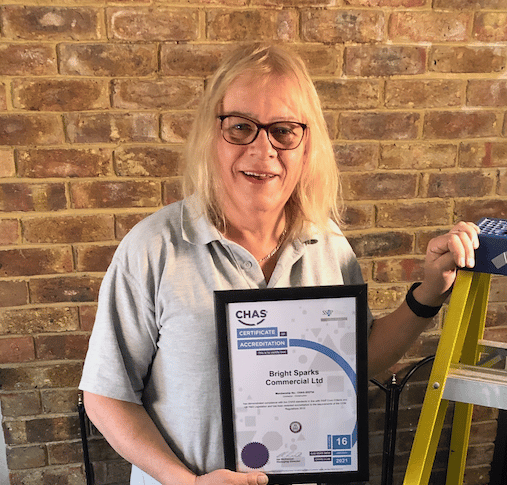 “We recently gained our certification for CHAS which is the Construction Industry, health and safety accreditation. It was about three months of hard arduous work, but it gets us in with a lot of other major commercial work. It states on the certificate SSIP, which is the core criteria for a lot of the construction people, National Health Service and other big organisations, wanting somebody with SSIP accreditation.

It did cost quite a lot of money, but it’s basically, risk assessment and methods statements for everything that we do, ensuring that staff have been trained in all matters of health & safety, and that they are aware of potential risks from potentially unstable floors, the awareness of asbestos in commercial properties, and even in private dwellings. If found, we have to take the appropriate measures such as additional protective clothing / safety masks, it can get to a stage that the electricians have to come away from a job whilst a client enrols the specialist help of Asbestos removal companies.

All the staff are now trained up to high levels, and when we have to do something slightly different, they have to go on further training. Rather than just rocking up and putting in a socket – if we are doing a commercial job, we go in with the risk assessments, the method statements, the COSHH (control over substances hazardous to health) we then submit it to them, and if that’s acceptable, we get a confirmed date to go in and do the job. It’s been well worth it as it’s covered itself already. We keep our customers informed on every step of the journey and when people find out we have the CHAS accreditation it’s another tick and we’re more likely to get the work.

We’ve now got 5 sparks on the team, Hannah in the office and I float between the electrical work and the site surveys for quotations, I also tend to do the emergency calls at evenings and weekends and sometimes during the day. The majority of my time is spent going out visiting clients to clarify exactly what work needs doing, it’s very frustrating when we send an electrician out to a job and find out the work is completely different to what the client has requested on the phone, so I make sure we know exactly what work needs to be done before we send someone out.

We have to follow the regulations and we’re checked out every year by the NICEIC with on-site visits for up to a day, as we’re approved contractors with them now. They actually approached us and suggested, as we were regulated by them, and due to the amount of work we were doing it would be beneficial for us to have approved contractor status, giving customers peace of mind that we are good at what we do, it’s really important that we adhere to all of these standards.

There’s a new legislation that’s coming in on the 1st of April this year for landlords, big time, and we’re becoming trusted electricians to lettings companies around Tunbridge Wells, Crowborough and Maidstone who are calling upon us to carry out the tests for the new legislation. It used to be more important to have the gas safe check, now it’s more regimented that all the electrics are checked as well, making sure the landlords are giving their duty of care to their tenants.

I’m still finding the time to do the FOH (Front of House) work that I do with the music venues and churches – more so with in ear monitors now – mixing each individual person/musician which is a bit more tricky than doing FOH, I could be mixing up to a dozen people on stage with the in-ear monitors (they are the ones who to have hearing aids in their ears), with their own particular mix of sounds coming to their ears from around 40 channels (instruments / tracks / vocals) to finely hone in on to keep them happy and able to perform, you’ve got to be on the ball! It’s a bit of fun, I also help the venues with their lighting, which is good, because again I keep my hand in, in case someone else lets the venue down at last moment

At Bright Spark Electrical Services, we’ve got 3 new vans to add to the fleet, and also a new girl electrician on the team! Louise is out on the road with the others, she’s been an electrician for about five or six years now and has been with me since December. It goes more towards our ethos of the only female lead electrical company in the South East – also we now have Hannah in the office too, who takes the calls / texts / messages from new and existing clients – organising all of our days to the full. Our ethos is we are a female led electrical company and no job is too small. There’s a lot of electricians out there who won’t do work that’s less than a day, we don’t mind looking after the small jobs, changing a switch or a socket etc, our reputation will only improve because bigger jobs, and more work, are likely to come from those smaller jobs, plus people will remember us and recommend us to others.”

My first love has always been music, back in the early 80’s, I was in bands when I was at University, I played keys, I sang backline, and over the years it’s always been there, although family and business commitments have overtaken it. I haven’t done so much of my own personal music making since, but I’ve always been involved in music, mostly with sound engineering at gigs or churches and bands in pubs, doing the mixing.

I joined Rock Choir, which is a fabulous organisation that is a really good multi-layered singing experience and that got my vocals back in. I had already been involved with doing the sound for local churches but this is much more involved, I’m now part of a team at Hillsong Church Tonbridge, with around 10 core members in production and I’ve been there for 7 years, covering front of house sound engineering for them for 4 years, and more recently as in-ear-monitoring engineer and also providing cover for the stage lighting. I’ve engineered at the 02, Dominion Tottenham Court Road, Theatre Royal on Drury Lane and Apollo Victoria. I’ve worked with the sound engineers for U2, Tom Jones, Mike and the Mechanics and Il Divo, recorded and sang on an album recorded at Abbey Road and have worked the sound desk at The Dublin Castle, in Camden, where Madness first started out, as well as Amy Winehouse played frequently. All the work I do for the Church, I do for free, I love it and I get loads from it.
A few years ago now some friends of mine said; “why don’t you become an electrician” – I laughed at them at first, but then thought not such a bad idea, so after work I went to night school for 3 years. After working for a number of different contracts I started to work on my own, I was doing alright and then I joined something called the Entrepreneurs Circle which gave me the boost I needed and Bright Spark has grown from there. I never turn any work down, even to change a light bulb, it’s about building relationships. We had a large contract for the Rosemary Shrager Cookery School, where I was the lead electrician, working 12/16 hours a day to get the job finished and I earned a lot of respect. Subsequently, every year, we’re getting more and more work, through referrals, repeat business, BNI or other networking. We now have a team of 6, including one person in the office and 5 of us out on the road. We’re always really busy.

Karen Smith and her team of electricians are based in Tunbridge Wells, Kent, covering areas across Kent and Sussex. Bright Spark Electrical Services have had over 40 years of experience and specialise in domestic installations. Our services range from rewires and replacing light fittings to replacing a fuse in a plug, regardless of the task Bright Spark Electricians are capable of the job. Our team at Bright Spark pride ourselves in providing the greatest customer satisfaction achievable with every job, delivering you with some of the best electrical contractors in the South East.